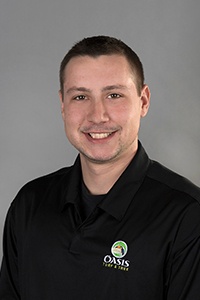 Unfortunately, Chip soon learned that this particular landscaping company probably wasn’t going to be the place where he could fulfill those dreams. In fact, Chip was finding that work was a rather unpleasant place to be.

Chip remembers feeling disrespected and unappreciated. Even though he essentially ran the mowing division and was an essential part of the operation, he says his boss treated him like a kid and took him for granted.

“There were such unrealistic expectations and we were never listened to,” says Chip. “There was just me and another guy that ran the entire mowing crew and even though the company owner had no idea what we dealt with on a daily basis, we were expected to do more than was even possible. It was just very frustrating.”

A Search for Something Better

It was these negative experiences that lead Chip to look elsewhere. Of course, he was skeptical about what he might find. He was worried that the next company he worked at would just be “more of the same.”

Instead, he was pleasantly surprised.

At age 20, Chip came to Oasis Turf & Tree. That was 7 years ago. But he says the difference was immediately noticeable.

“From day one, it was obvious that we are appreciated here,” Chip says. “It makes you feel good when your work is appreciated. It makes you actually want to come to work.”

An Ability to Advance

But what Chip was impressed with even more was the opportunity for advancement, something that he never could have imagined in his prior dead-end job.

“At Oasis, they not only pay for you to earn certifications but they give you a pay raise once you do,” Chip says. “They actually want you to take advantage of these opportunities to further your education and they reward you for doing it. That kind of blew my mind.”

Chip certainly took advantage of these opportunities. He is certified by the National Association of Landscape Professionals (NALP) as both a lawn care and tree care technician.

“When I got here, I was 20 years old and honestly had no idea what my future held,” Chip says. “But it quickly became obvious that this could be a career for me. Oasis has helped me learn everything that I need to learn in order to advance my career. It’s really up to you how far you want to take your knowledge but they’re there to support you if you want to take those next steps.”

Chip says that mowing was just a “job” for him, what he sees at Oasis is a “career.”

Another huge difference that Chip noticed at Oasis was the company culture. Not only do we want our individual team members to advance in terms of knowledge and career opportunities, but we want everyone to grow as a team, as well. Chip says that he genuinely enjoys the company of everyone that he works with, and that helps make it an incredibly positive place to be.

A positive and team-oriented company culture is something that Oasis strives for.

“We do a lot of get-togethers where we all really get to know one another,” Chip says. “As technicians, we are the first ones here in the morning and often don’t get to interact with everyone else on a daily basis. That’s why Oasis makes an effort to have events where we can all be present as a team. Even if we don’t see each other every day, we’re all in this together. We’re all part of making Oasis grow as a company.”

Whether it be a company barbeque or an outing, Chip says these types of events mean a lot to him.

“We just went to a Cincinnati Reds game over the summer and for the company to do that, to go that extra mile, says a lot,” Chip says. “They didn’t have to do that. We’d all keep coming to work if they didn’t. But they do it because they care about us and they want to show that they appreciate us. To feel appreciated really does mean a lot.”

We asked Chip to sum up how he feels about Oasis and he put it this way:

“Oasis is a company that takes care of its own.”

Are you someone like Chip who is feeling unappreciated or even mistreated at your job? Do you not like going to work because of it? The truth is, work doesn’t have to be a place that you can’t stand.

If you dislike your workplace that much, you just haven’t found the right place, yet. We invite you to explore the possibility of working at Oasis Turf & Tree, just like Chip did.

Looking for a lawn care job in Cincinnati and Dayton, OH? Consider joining the Oasis Turf & Tree team and find out how you can become part of the family.