So, when Dan passed by those Oasis guys and saw how close they were—and that they were genuinely happy—it became a goal. Dan says he wanted something like that. And when he heard that Oasis was hiring, Dan says that image popped back into his head right away.

“As soon as I heard the name ‘Oasis,’ I immediately pictured that image of camaraderie from the gas station” Dan recalls. “I decided I wanted to see if that was something I could be a part of.”

A Different Kind of Company

So, Dan went after it. He had already been searching for lawn care jobs in Cincinnati and Dayton, OH, and this seemed like the best opportunity yet.

“I went down to the office and met some of the employees and the owners and I realized that this wasn’t like any other lawn company out there,” he remembers. “I felt like that image of camaraderie I saw was something real and I was excited to pursue it for myself.”

But Dan admits he was still nervous. 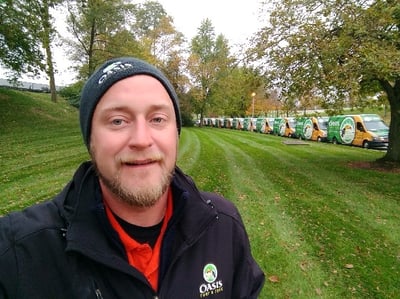 “If I’m being honest, I came in with a lot of worries,” Dan says. “I didn’t have the best impression of the lawn care industry up until that point. I was in my early 30s and so far had only worked some short-term jobs that didn’t pay very well. I thought that might be all the industry had to offer."

"But within the first week of training sessions, I could tell this place was something different. This was a company that cared about investing in me.”

Since that time, Dan says he has gotten several new certifications and pay increases as a result. He was impressed to learn that Oasis supports its people in going after certifications, providing them with the training they need to be successful. Dan admits he never had those opportunities before.

In fact, it was Dan’s eagerness for that education that really impressed company founder Rob Reindl.

“It was obvious to me that Dan was eager to learn more about the industry,” Rob says. “He also has a strong drive toward being a leader. He takes pride in sharing his knowledge and in supporting other members of the team.”

Which is why Rob says Dan was later promoted.

“Dan has moved up very quickly and it’s a testament to the fact that when you work hard and do a good job, you can be very successful,” Rob adds. “Promotions are not handed out, they are earned, and Dan has certainly earned it.”

And those close relationships that Dan witnessed walking out of the gas station that one day? Now Dan is a part of that.

“From the very first day I started here, I could see that employees were really close with one another,” Dan says. “It was like one big happy family.”

Now that Dan is a part of that family, he says it’s “the people” that make his job great.

“Our entire organization is a close-knit group,” Dan says. “Many of us hang out outside of work. We really care about one another and we’re there for each other. That’s the mental image I had of what Oasis was all about and for me, it’s come true. My favorite part of this job is getting to work with these people.”

Dan’s story is about taking life by the reins and about having the guts to pursue new opportunities, even when you’re nervous about it.

For Dan, seizing the moment and giving Oasis a shot—despite previous bad experiences within the industry—has paid off. The fact is, he always had the drive to work hard and be successful, he just had to find the right company.

“When I started this business, I wanted to create a place where people could earn a good living and grow as not only employees but as people,” adds Rob. “That’s not the image that most people have of our industry. They think of it as a lot of dead-end jobs. But I wanted Oasis to be different.”

On top of all that, Dan’s story is a testament to the fact that working hard will not go unrecognized if you’re at the right company.

“Dan is a success story,” says Adam Zellner, the company’s VP of Sales. “He’s someone that came to this company with the willingness to put in the hard work and it paid off. Dan is always one of the last guys in the office at the end of the day. He’s not a clock puncher. He’s someone that works hard until the job is done. And that’s why he’s had so much success and so quickly.”

Want to be Part of the Family, too? 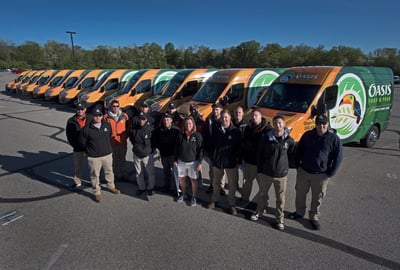 To others who might have turned to the internet and are searching for lawn jobs in Cincinnati or Dayton, OH, Dan’s story is an excellent example of overcoming fears and following a dream.

You might be in the exact position that Dan was. Now you just have to take the leap.

“You might be looking at a position here and wondering if you don’t have enough experience to make it happen,” Adam says. “But you should know that we hire on character first. We can teach lawn care. If you’re a person that has fire and drive, like Dan does, then that is what we want most of all.”